Is Poor Posture is contributing to your Muscle & Joint problems.

Why Poor Posture is contributing to most of your Muscle & Joint problems.

There are numerous factors which can impact a person’s posture. The outcome of poor posture is the same regardless of what causes it, and is now becoming so common that most people have some first hand knowledge of the consequences of not maintaining good posture.

Low back pain is the most frequent complaint, but research shows neck, shoulder, arm pain and headaches have become increasingly widespread because of postural dysfunction. Foot and knee problems are also becoming more common due to the emphasis on running and fitness.

Risk factors for poor posture also include other factors such as job stress and strain. Workers who have higher job stress have been can be more likely to develop neck and shoulder symptoms.

Poor posture is the posture that results from certain muscles tightening up or shortening while others lengthen and become weak which often occurs as a result of one’s daily activities.

Poor posture interferes with a number of the body’s postural mechanisms including: 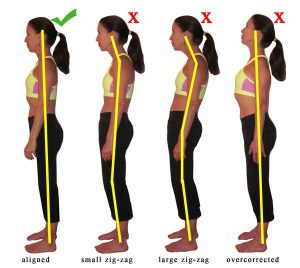 Types of Muscle Fibres and their role in poor posture.

Skeletal muscle is made up of two types of muscle fibre – static (often called ‘slow twitch’) and phasic (often called ‘fast twitch’). Generally, static muscle fibres are found in the deeper muscle layers. They help us to maintain posture without too much effort and contribute to balance by ‘sensing’ our position and relaying this information to the brain. Phasic muscle fibers are used for movement and activity.

Static fibres burn energy slowly and can keep working for a long time without tiring. However, phasic fibres quickly run out of steam. Poor posture causes muscle fatigue because it calls on the phasic fibres instead of static fibers to maintain the body’s position

Over time, poor posture that demands support from phasic fibres causes the deeper supporting muscles to waste away from lack of use. Weak, unused muscles tend to tighten, and this shortening of muscle length can compact the bones of the spine (vertebrae) and worsen posture.

Nervous system feedback on the body’s position in space

The deeper layers of muscle are concerned with ‘sensing’ our position in space and relaying this information to the brain. If this function is taken over by muscles that mainly contain phasic fibres, the brain gets an incomplete picture. The brain assumes that the body needs to be propped up to counteract the effects of gravity, so it triggers further muscle contraction. This adds to the general fatigue and pain felt by the person with poor posture.

Injuries related to poor posture tend to be overuse injuries which build up over a period of time, rather than the more sudden, acute form of injury. Here are some of the most common:

Sciatica is a symptom more than a condition, as it refers to pain which refers down the back of the legs, rather than to the cause of the pain.

The cause of Sciatica can be from the lumbar spine, where a disc is slipped and is compressing the sciatic nerve, or this compression can occur at the point where the sciatic nerve passes under (or through in some cases) the piriformis muscles in the buttocks.

In this case, the muscle is often overworked and in spasm, resulting in compression on the nerve.  The causes of piriformis syndrome include leg length differences and muscle imbalances including tight groin muscles and weak hip abductors.

Aching and stiffness in the shoulders and neck are an extremely common problem, especially for those involved in desk and computer working.

Whilst many will just ‘get on with it’ and others will perhaps seek a regular massage as treatment, the real cause tends to be postural.

Whilst seated, staring at a screen for hours on end, it is easy to fall into a slumped position, with rounded shoulders and the neck protruding forwards.

Assuming this position day-in, day-out can result in shortening of the chest muscles and weakening of the small, postural upper back and neck muscles which work to pull the shoulders back.

This results in the larger back and neck muscles such as Trapezius and the Rhomboids working harder and becoming tight and achy. Working on correcting these imbalances, by stretching the chest muscles and building endurance strength in the postural muscles such as the lower Trapezius and Serratus Anterior can result in a long-term fix.

Often also referred to as anterior knee pain, this condition is an overuse injury which results in non-specific pain at the front of the knee, often aggravated by walking down stairs or hills and getting up after sitting for long periods of time.

Lower back pain has many different causes and often the cause of an individual’s pain cannot be pin-pointed.

In cases where the pain develops gradually with no history of trauma or overuse, the problem may be due to poor posture. Having poor posture places extra strain on the muscles and ligaments which support the lower back.

This causes certain muscles to over-work and results in muscle spasms and sometimes muscle strains.

The most common postural factors to result in lower back pain include a leg length difference, overpronation and pelvic tilts which result in an arched lower back.

Shoulder impingement injuries occur when the space in the shoulder joint is decreased, resulting in pinching of one or more of the tendons which pass through this space.

The reason for the decrease in space is often related to poor posture.

If the chest muscles are tight and the upper back muscles such as the lower Trapezius and the Serratus Anterior are weak, through extended periods of sitting slouched at a desk, then this can cause the shoulder joint to sit in a forward position that can lead to shoulder pain due to shoulder impingement.