Many Miles For Paula – We Need Your Help. 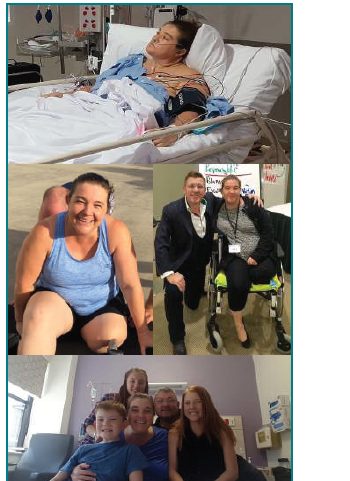 Where – University of The Sunshine Coast Athletics Track

Why – To raise Money for Paula Gowland.

How To Donate or Register – https://chuffed.org/project/many-miles-for-paula#/supporters

Events on the day

Paula Gowland was inside hanging curtains at the start of June 2014 when her life changed forever. Paula was standing on the end of her bed trying to hang up the freshly washed curtains when she fell and broke her left leg in four places.

Paula was rushed to the hospital, where she was told she needed surgery. However the night after the surgery, something went wrong. Over the next three and a half months, Paula had six different operations at a private hospital to try and save her leg. All, however, were unsuccessful. After infection set in and surgeries were unable to save it, Paula then had to have her leg amputated.

The doctors wanted to amputate the leg above the knee, but Paula sought a second opinion and found a surgeon in Sydney who said he would amputate below the knee, giving Paula much better functionality. Unfortunately after the surgery, Paula then battled 12 months of infections, and ultimately had to have an above-knee amputation as well. She spent six weeks in rehabilitation in Sydney learning how to walk again, which she said was ‘the hardest thing’ she’s ever done.

In November 2016 Paula finally got out of the hospital after being in there for essentially two years. Although Paula is finally free of infection and able to go home, the last two and a half years had a huge impact on her family. Now Paula is focusing on her family and rebuilding her relationships with them, as well as getting a new prosthetic leg.

For Paula to walk properly she needs a micro-processing leg that can handle her busy lifestyle as a business owner and a mum of three, the prosthetic leg that she has been prescribed is worth $85,000.

For now, Paula is just happy to be home with her kids and husband, saying every day is better than the last.

How You Can Help.

May 12, 2017 by andrew in Fitness, Newsletters, Uncategorized Comments are off
© 2021 All Rights Reserved. Physio Professionals